kontrolr (stylized with a lower case ‘k’) is an iOS MIDI controller application. Physically, kontrolr sends MIDI data to a device via the Lightning-USB Camera Adapter1 and a USB-MIDI cable2. MIDI data has the benefit over OSC that firstly no network connection is needed, hence no router and dependency on wireless transmissions, and secondly, that no OSC to MIDI program (i.e. OSCulator3) is necessary for controlling DAWs (Digital Audio Workstations), again removing a potential layer of error.

kontrolr is built using openFrameworks, and the external addons ofxUI and ofxMidi. The application’s key functionality is as follows: 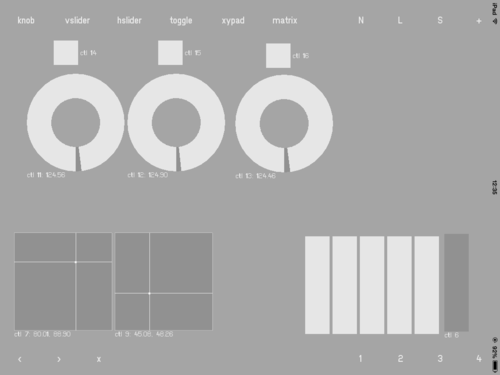 The following quick video demonstrates how the various components, kontrolr, LiAMP, and LiVid.m4l, communicate and thus how П is performed live.

1 Apple’s Camera Connection kit (and the updated Lightning Connector) allows one to connect their camera with USB to import photos and videos. However, it has the added hidden functionality of allowing any class compliant (a device that doesn’t require extra drivers when connected to Windows/Macintosh computers) USB audio interface or MIDI controller/keyboard to be connected to an iOS device. More info can be found in this post.
2 A cable with a USB plug on one end, and an IN/OUT 6-pin MIDI connectors on the other end.
3 OSCulator is an application which connecots to OSC devices (such as wiimote etc) and converts their input data into another type of data suitable for other applications, for instance MIDI and Ableton Live.