LiVid.m4l is a Max for Live package for live video performance, constructed in a similar manner to LiAMP. Although VIZZable exists which is a great kool for live DVJ sets, for Live Video Art I wished to use LiVid, a live video performance system developed for Max, which had been been robust during a tour of П. Thus LiVid.m4l is a converted and improved version of LiVid.

First of all is LiAlg.m4l.SEQUENCR, a module which plays a folder of videos one after another, where each video is beat-synced to four-bar measures of the current Live set. This has since spawned LiVid.m4l.VIDEOSEQUENCRSIMPLE, which just plays the videos without any tempo syncing, and LiVid.m4l.LIVECINEMA in which the videos aren’t automatically played, instead chosen by automation in Live. 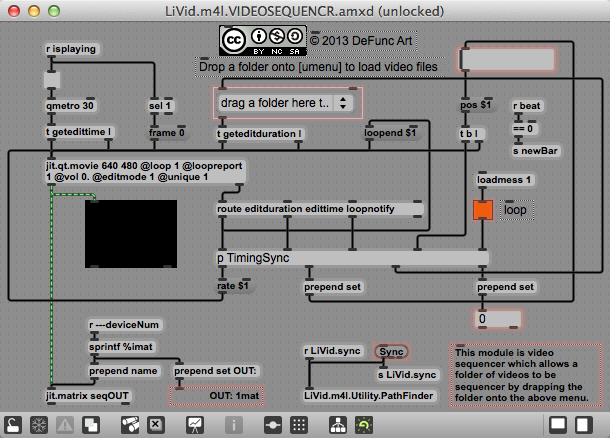 Unlike m4l audio and MIDI modules which can pass data in a chain via [plugin~]/[plugout~] and [midin]/[midiout], as Live wasn’t designed for passing [jit.matrix] between devices, how should we go about creating a chain? Jitter matrices are mere references to a block of memory, and so any matrix can be loaded on any device once the name is known. As I plan on keeping all my videos on the same Track, using the Device number as a unique matrix name seems like a logical choice.

Consider a simple BRCOSA (brightness, contrast, saturation) effect. Typically we’d have an input matrix, do some effects, and then have an output matrix. In this case the input will be a named matrix (say from LiAlg.m4l.SEQUENCR), but what about the output matrix? We cannot write to the same matrix as we’ll clearly mess up the input/output process, so instead we write to another matrix. This is the simple principle of LiVid.m4l. We write to the matrix of our device number, and we read from the matrix of the previous device number. 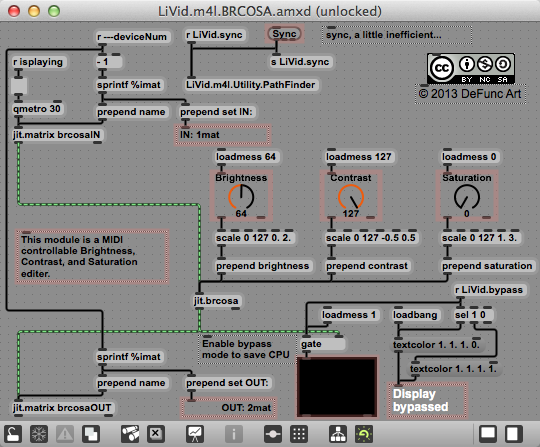 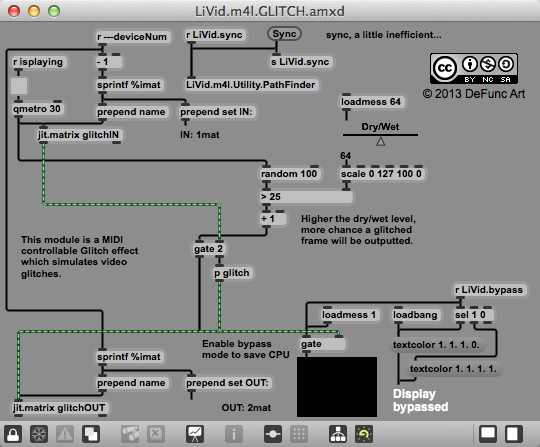 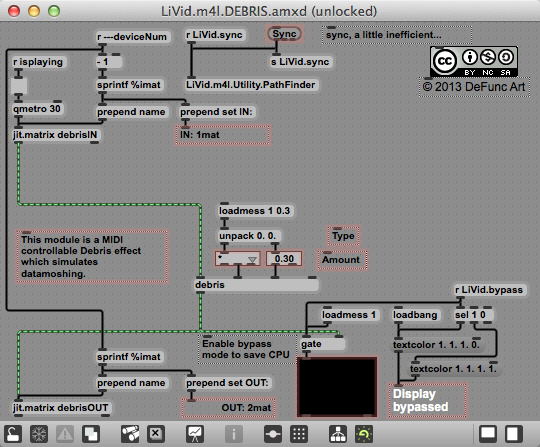 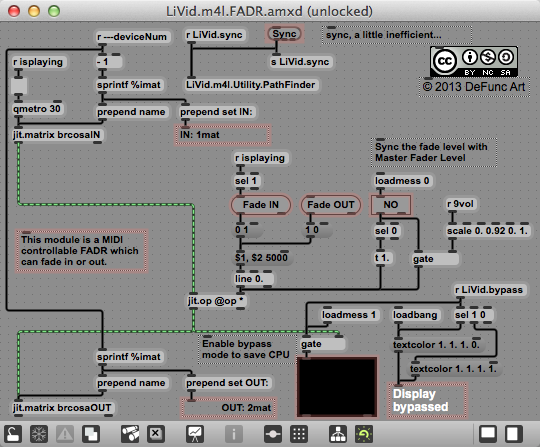 while LiVid.m4l.VIEWR is a simple [jit.window], with a bypass and fullscreen option, but also a second viewer option if the main window is used as an external screen (for projecting) and you need to monitor the video when performing. 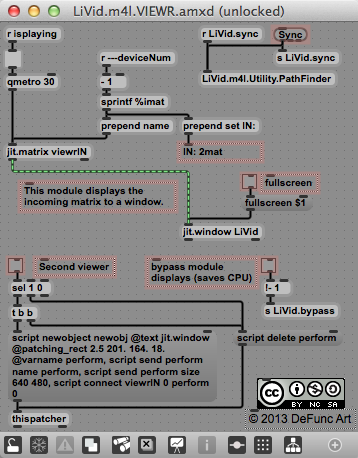 Now you might be thinking, what if I remove a device, add a device, or swap positions in the chain, how will the named matrices be updated? This can be done manually by clicking on a module’s sync button, or automatically via LiVid.m4l.Utility.Sync. It should be noted that LiVid.m4l assumes that all devices are enabled at all times, otherwise the chain is broken. As this is how I use the software, and I’ve designed it for myself, I’ve no intention of changing this small little fact. 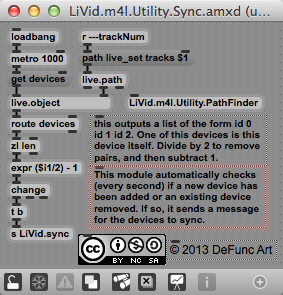 Both LiVid and LiVid.m4l were designed during my MFA at Goldsmiths. Initially I had reservations about burdening Live with both the Audio and Visual elements, but so far the system has been robust during my final degree performances, but ultimately offering much more functionality, and a better audiovisual performance. For now LiVid is depreciated, but LiVid.m4l is still in development - stay tuned for updates!