Other than knowing the correct gender of a noun in German, one of the other difficulties is knowing how to form its plural! This, at least to me, seems more complicated than in English, French, or Russian. Der Die Das is a great application to know the test the gender of a noun, while apps like Babel and (potentially) Memrise state the article when studying a new noun.

However, no one seems too interested in testing one’s ability in the plural of a noun, other than this German Noun Quiz. So I decided to throw together a simple proof-of-concept to determine if in fact such an application would be beneficial (to me at least) für Deutsch lernen.

As far as I can see, there are two possible implementations:

The HTML file is very simple, and basically displays the question in a header, lets the user answer in a text box, and displays the score below in a paragraph

while all the computation happens in the javascript file GermanPlurals.js

And our very basic game is then operational! 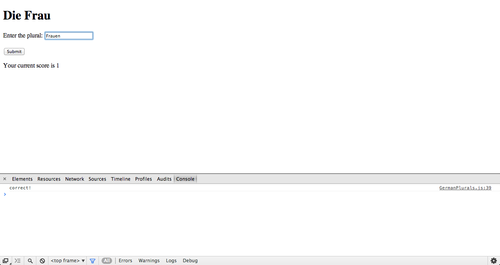 One annoying thing is that the ENTER key doesn’t work by default to submit the answer. This can be fixed by adding the simple script

to the HEAD of the HTML document.

So the proof of concept is operational, and, if it had a larger dictionary, I believe it would be a useful study tool. Although German Noun’s Quiz is already quite a fully-functioning application (singular and plural), it requires the purchase of noun packs for 99¢ each. Thus I feel that a fully-developed plurals-testing application could have its own (small) place in the market if free and fun to play.