Today I merged the writing and button-pressing versions of the German plural app into a single DPNT (Deutsch Plural Nomen Test) application. Firstly, the main page (index.html) allows the player to play either game, or to get information on the app 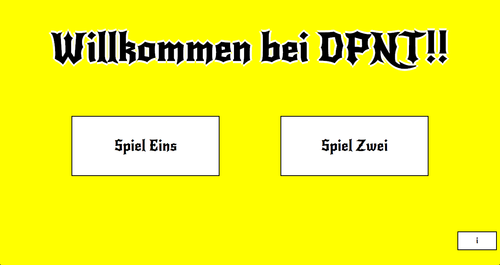 The application follows the style derived yesterday, utilizing New Rockstar from Google Fonts as the main font. By the way, if you are unfamiliar with Google Fonts, basically you can select a font, incorporate it in your HTML file using

and then utilize it within CSS using

The information page simply explains how to play the game 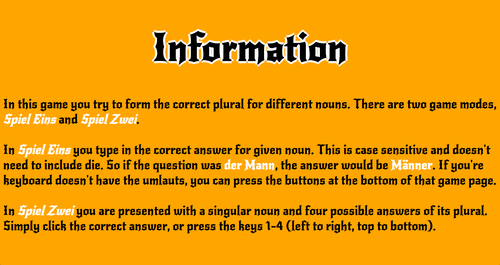 where Spiel Eins is not only an updated UI of Tuesday’s post, but also includes buttons for the umlauts incase the user doesn’t have them on their keyboard (personally I prefer to use ALT+U then A/E/O/U when typing on the Mac US keyboard than use the German keyboard). 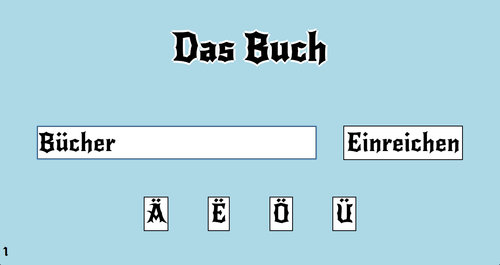 which seems to do the job just fine. However, the user can go backwards/forwards at any time (as these are merely webpages) so some confirmation should be used during the game etc.

Finally, an array is a great way to store the words, but having to manually type them in

isn’t the most efficient way, nor flexible if I wish to add another pair. Instead, this can be stored in text files, and then grabbed using jQuery

where the words here are separated in the text file by newlines. These global variables can then be references in GameOne.js or GameTwo.js with

Now that a basic implementation is achieved, the main priority is Facebook integration. Some other nice additions would be: