When a script inheriting from MonoBehaviour is attached to a GameObject, detailed information about that GameObject’s properties are displayed in the inspector window. If the GameObject has a lot of properties, the inspector can seem cluttered, making it difficult to find specific properties. Moreover, when the script writer isn’t the person actually viewing the inspector, it would be good to display additional information and verify input when possible. Luckily there are a number of attributes which can help us achieve this.

Although Unity state that “you will almost never need [SerializeField]”, the [SerializeField] private combination is often used to adhere to encapsulation while serializing private variables. [HideInInspector] is very useful to hide serialized class members which don’t need to be edited in the inspector.

Note that [RequireComponent] only checks for missing dependencies when the component is added to a GameObject - existing instances which lack new dependencies will not have those dependencies automatically added. Thus this attribute is useful in insuring that the initial setup is correct.

The [Range] attribute is especially useful when an int or float should be constrained to a certain range. Not only does it force all input to be valid, but it supplies an intuitive method of quickly testing values values in play mode. 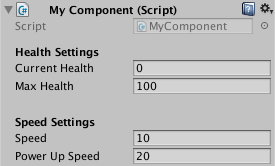 By default, the inspector displays property names as capitalized words. Although descriptive names should give a good idea about what a property does, additional information can be very useful for teammates who simply assign values to properties via the inspector without any familiarity with the script itself (i.e. Level Designer, UI Artist). The [ToolTip] attribute adds a tooltip when the mouse curser hovers over the property.

By default a string that is too long to be rendered inside the inspector window will be cut off. For long, editable strings that need to be displayed in the inspector, one approach is to use a [TextArea] which automatically wraps a string within an assignable height rectangle - if the string is too long, a scrollbar appears. MultilineAttribute allows a string to be edited in a multiline textfield, however doesn’t automatically wrap the string. 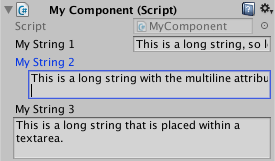 The [HelpURLAttribute] attribute provides a custom reference link which is triggered once the help (?) icon is clicked in the inspector (see any of the images above).

Today we have seen some quick yet powerful approaches in making a component’s inspector window display relevant information in a tidy and intuitive manner. Over the next few tips I will be discussing how editor scripting can be immensely useful in building tools for the developer and their fellow teammates.