Internationalization is the process of designing a software application so that it can easily be adapted to various other languages and regions without any programming changes. Localization is the process of adapting internationalized software for a specific region or language by adding locale-specific components (€2.99 => 2,99€) and translating text (Hello World! => Hallo Welt!). Pseudolocalization is a software testing method used before the localization process in which a fake (or pseudo) translations (with the region and language specific characters) are generated: Hello World! => Hellö Wörld!|ÜüäßÖ

The benefits of pseudolocalization are three fold:

Considering English as the base language, after translation many languages will exhibit Text Expansion and have longer text strings. Generally German extends by 10-35%, Polish 20-30% and Russian by 15%. As a quick rule of thumb, I like to utilize IGDA Localization SIG’s suggestions:

Note: some languages can actually have shorter text strings. In this post I will be considering languages that generally expand.

From various examples I have seen on the web, there are many different ways to visualize these pseudo texts. Personally I prefer to generate separate pseudolocalizations for each target localization and test them separately to ensure that each target localization will be adequately rendered. My pseduotranslation style starts with the English text, replaces any Basic Latin characters (i.e. English letters) with similar special characters, uses pipe | as a divider, and then adds a few random characters at the end (depending on original text size.) So Hello World! becomes:

It is important to remember that this pseduotranslation is non-sensical: it is not a real translation, instead merely a way to test that the game is ready for the translation stage.

A pseudolocalization generator can easily be coded in Unity to enable quick testing. 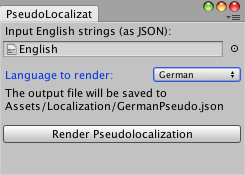 and saves, for instance, GermanPseudo.json to the save directory as the original file:

This JSON is read from and written to disk using the JSON Serialization mentioned back in Tip #9.

This approach could be easily extended to other Latin script languages, for instance:

I don’t have any experience with languages that contract (when translated to from English) or languages that are written right-to-left, but I imagine a similar approach to Russian would work perfectly fine.

The earlier that localization issues are flagged, the less time required and more cost effective the solution will be. By investing a small amount of time in generating pseudotranslations and verifying that the game is ready for localization, one can be assured that everything is in order before actually beginning the localization phase.

Pseudo-Localization – A Must in Video Gaming