Csound is an open-source C-Based Audio Programming Language which enjoyed popularity throughout the late eighties and nineties. During my MA in Electroacoustic Music Composition, I was first expose to the language, along with Max/MSP. Although Graphical languages like Max and creative coding frameworks like Processing and openFrameworks are more accessible than Csound, Csound nevertheless still enjoys active development and a solid user community.

Moreover, since the explosion of iOS and Android smart devices, Csound has been ported and can be incorporated into self-coded musical apps. In fact, long-time developer Richard Boulanger created Boulanger Labs and has released some Csound based apps on the Apple App Store. There is also a freely downloadable Max object which allows Csound to be incorporated and performed in real-time from Max, and a propriety set of Max for Live Csound-based objects.

So how exactly does Csound operate? Firstly download the relevant version of Csound 6 for your OS here and install it. Csound ’programs’ comprise of two text files; an orchestra declaring the instruments and a score specifying notes and other relevant parameters. Csound then processes these files and renders an audio file or outputs the audio in real-time.

These orchestra and score files can be unified into a single CSD file, written using any standard text editor, and saved with the .csd extension. They can be compiled and executed using the Terminal, however for these tutorials we will utilize the included GUI CsoundQT. Open up the application and you should be greeted with the following screen: 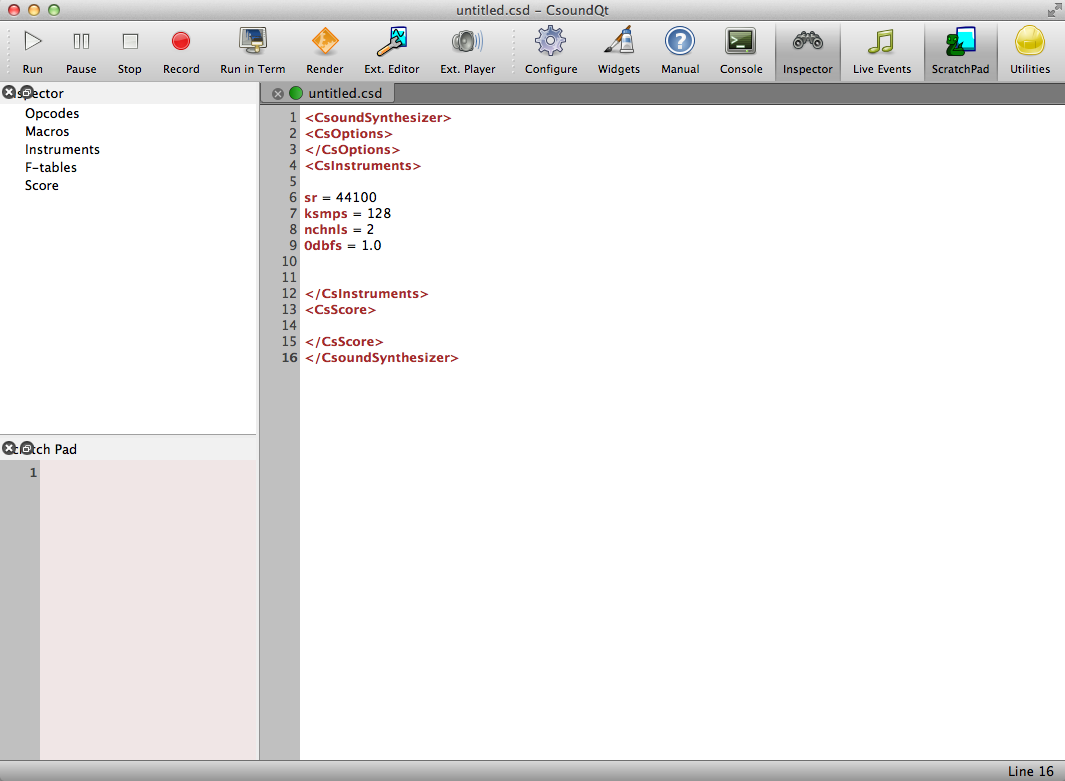 and then press the ‘play’ button and you should be greeted with a simple sine tone playing for 5 seconds! You can even directly render this composition to an audio file using ‘render’ or edit the audio file in an audio editor (i.e. Audacity) directly using ‘editor’.

Our first Csound program is a very simple instrument containing an oscillator which has an amplitude of 10000 and frequency of 440 Hz, and utilizes function table #1. This table is defined in the score section of the file, and is defined to be a simple sine wave. The score section itself simple states that we want to start playing instr 1 for 5 seconds at time 0. Note that we have specified a sample rate of 44.1 kHz, and a control rate of 4410 Hz, thus the number of samples in each control period must be 10 (ksmps = sr / kr). In general, these basic settings can be copied between different Csound files.

In this first tutorial, we have set up our development environment and generated some sound. In the next tutorial we will continue with changing parameters of an oscillator.